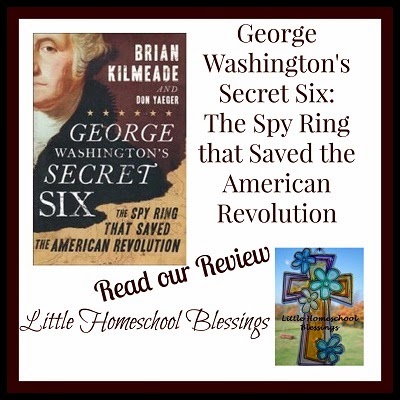 I received a free copy of George Washington's Secret Six from Family Christian in exchange for my honest review. I was not required to write a positive review nor was I compensated in any other way for writing the review. All opinions I have expressed are my own or those of my family. I am disclosing this information in accordance with the FTC Regulations.

Did you know that George Washington had a spy ring during the Revolutionary War and that it was composed of six people living in the Long Island area? He didn't even know who some of them were. In fact, their cover stories were so good that they were in danger of being hurt in post-war retaliation against Loyalists.

For many years the identity of two of the spies in the Culper ring were unknown until a historian, Morton Pennypacker, noticed that the handwriting of Robert Townsend looked a lot like that of Culper Junior, one of the unknown spies. Amazingly, in this way he had found the fifth spy. While one mystery has been solved, another (that of the identity of Agent 355 or "the Lady") is still unknown to this day. 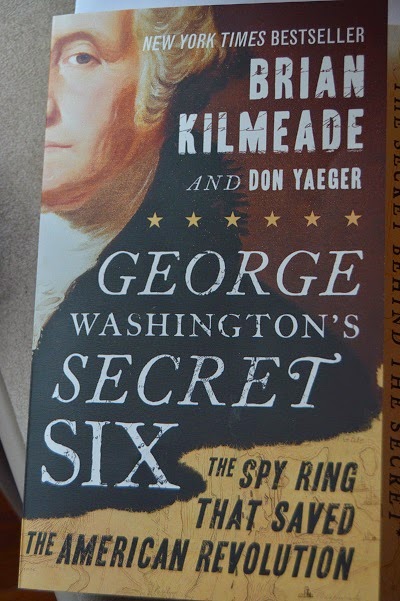 Ceesa once said to me that George Washington was one of her favorite guys from history. We've read about him a lot, but had never heard about his Culper spy ring. So when this review opportunity came up, I was really excited.

We received the book on a Friday evening and by Saturday morning it came up missing. The culprit? Poppa. It turns out he enjoys learning about George Washington, too. In fact, every time I tried to get my hands on it to read it so I could get my review ready, I had to hunt for it. Generally, it was on the floor by Poppa's side of the bed.

Needless to say, we've enjoyed it.

George Washington's Secret Six: The Spy Ring that Saved the American Revolution covers the time from the execution of Nathan Hale to the closing of the Revolutionary War. There are 252 pages and 18 chapters. There is an inserts with 8 pages of photographs, maps, ledgers, and sketches pertaining to the people and places that the book focuses on. 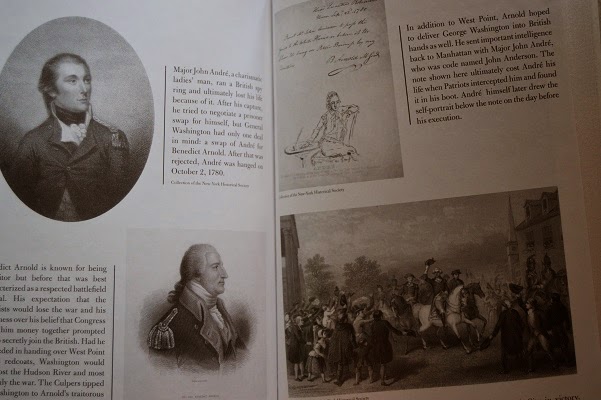 From the Epilogue..."We knew the story of the Culper Ring was important. We knew it was a story whose characters and events should be standard fare in history classes across the county. But what we didn't know was how relevant it still proves today within the intelligence community of the United States." 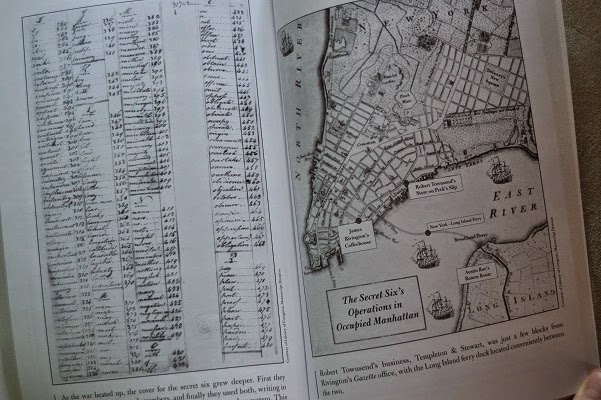 Our paperback edition has an afterward that contains sketches of seven women that in some way could have been Agent 355 with information about how the women may have fit the bill.

Anyone who likes reading mysteries, intrigues. history, or war stories will enjoy this book. You can get your very own copy of George Washington's Secret Six: The Spy Ring that Saved the American Revolution here.

~A Final Note~
There were three occasions that improper conduct of British soldiers against young women and/or women from houses of impropriety were alluded to or discussed throughout the book. For this reason, I'm going to wait a few years before I pass it off to Ceesa to read on her own. I would recommend it for independent reading with children about 15 years old and older or as a read aloud with you, the parent, omitting those sections that may be inappropriate for your children.

Family Christian has generously offered to giveaway one copy of George Washington's Secret Six: The Spy Ring that Saved the American Revolution for you free (for US) to our readers.

The winner will be randomly picked by Rafflecopter and will be notified by Bethany from Little Homeschool Blessings via email and posted here. Entrants must be 18 years or older and reside within the United States. This giveaway is in no way associated with Facebook,Twitter, Pinterest or any other entity unless otherwise specified. The prize will be issued by Family Christian. By entering this giveaway you are also acknowledging that you have read and agree to all of the Rafflecopter terms & conditions.

I love his faithfulness and humility. What a great man!

We love when he asked each of his officers to come to him to say personal goodbyes at the ending the war.

My son is memorizing a poem about his - love his truthfulness!

We learned several of the rules he wrote for copy work.

What a great find! My two boys are studying the American Revolution right now. It would really bring new life to our studies. Thanks for sharing.

Oooooh. This would be great for your studies. Especially since it is little known!

We read once about George Washington having wooden teeth. Ever since, my youngest has wanted to learn about him!!

That is funny. I wonder who else had wooden teeth at that time?

This is my daughter's favorite president. She did a report on him. She's very interested in this book.

Yep. I guess there is a reason for Presidents' Day being focused on GW and Lincoln!