So this past winter we did a study on the stars...umm...I am a bit behind getting this post up. So without further ado...

To prepare for our study, I read chapter 3 in the book Discover Nature in Winter and pages 815-826 in the Handbook of Nature Study. 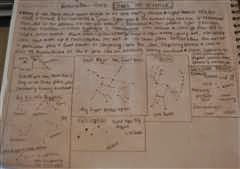 We drew constellations that we would see in the winter sky: Ursa Major, Ursa Minor, Cassiopeia, and Orion. And made notes about how the big dipper makes up the tail of Ursa Major. We learned Orion is in the Southern part of the sky.

We looked at how to find Polaris (the pole star or north star) and that it stays in the same place, and the constellations turn overhead. And then we sketched out how the big dipper moved around Polaris through the seasons. And how to find Cassiopeia by looking South of Polaris. 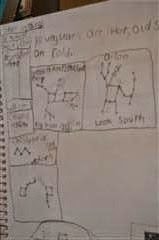 And we learned the little dipper looks like it is pouring into the big dipper.

We determined the best nights for star gazing by looking at clear sky charts. And we learned when cloud cover, transparency, and seeing are all blue on the chart, you'll have the best chance of seeing the stars. 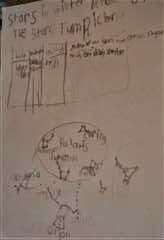 We used the Sky Guide app and spent nights learning names, locations, and the mythology behind the constellation names.

We found out the planets that we could see in December in the night sky from Earth Sky and sketched them in relation to the compass directions. In the evening we could see, in the southwest~Venus and in the east~Jupiter. In the morning at predawn, in the east~Saturn and mercury. After midnight, looking east, we could see Mars.

And because we were curious we added the Current Moon Phase widget to our side bar. We have previously studied the moon and learned its cycles and interesting names of each of the moons in different months.

Here are my notes:

It turned out to be a really fun study.