Cessa did some studying of the state of Ohio.  She made a map and read up on the state and then wrote up here own report. 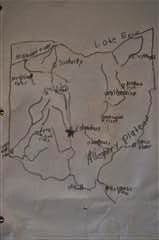 Indian Life
Early Ohio was covered in trees. It was good hunting land for the Indians. While the men hunted, the women worked. Their homes were made of poles. When a boy or girl was captured, they would steal another child, sometimes English. Some of them loved their Indian parents and did not want to go home. Some wanted to escape from Indian life.

Pioneer Children
Girls helped with house work. They used the spinning wheel, they made cloth, they churned butter, and they helped in the garden. Boys helped cut wood, plow the fields, plant seeds, fish, and carry water. Children picked herbs and spices, picked up nuts and berries, and kept the fire going. Stories are told about pioneer children protecting their homes from Indians.

Canals
Even though Ohio had many pioneers, it was a poor state. Farmers grew many corps and livestock to sell, but couldn't sell them. They had no way to them back East! In 1825, the first canals in Ohio began. But it was hard. Mosquitoes bit the workers. Mosquitoes carried malaria. Many died. There where two types of canal boats: passenger and food boats.