Ceesa wrote her own book about Norse Mythology. She drew pictures and retold stories of the the gods that derived from the lands of ice.

Norse people (Vikings) How the World was Thought to Begin
In the beginning, there were two globes one of fire and lightening and the other of ice. One day they had a battle. The melted ice made the giant, Ymir. Ymir drank milk from a cow. One day the cow licked away some ice and made the beginning of gods, the Aesir.

One day the Aesir, all the gods, killed Ymir. He was so big his blood drowned other giants; except two- a man and his wife. She was in a chest. All of the rest of Ymir's body was used. His brain became the clouds, his body, the earth and the heavens, his blood made lakes and springs, his bones became mountains his broken bones were sand and pebbles, his skull made the heaves and his eyebrows made a fence to keep the giants away from men.

Night and day were two children, sister and brother. Their father named them sun and moon because they were so beautiful. Odin gave them swift bright horses and set them in the sky. The brother took a pair of children to the moon with him and put them on the moon.

Odin and his brothers found the ash and elm trees and made them into people. Ask and Embla were their names and that is the beginning of things. 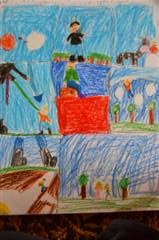 Yggdrasil, the World Tree
There was a world tree. Its roots went down to the bottom of the earth. The top touched the top of the sky. The branches spread over the earth. As long as the tree stood, the gods would live. Urd, Verdandi, and Skuld took care of the three because worms made holes in the tree, a dragon tried to destroy it, and all the birds of the world used the twigs for their nests. There was a beautiful stream that three ladies gave the tree and it healed its wounds. There was an eagle at the top with a small eagle that would watch the earth. There was a busybody squirrel that would go back and forth carrying insults between the dragon and the eagle. 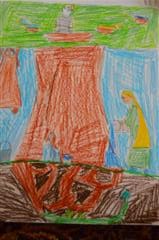 Asgard
The big rainbow lead up to Asgard. It was a very beautiful place because there was gold and silver. The Aesir people loved gold and silver. In the middle of Asgard, there is the beautiful field of Ida where they play chess, throw spears at targets, and chase each other in circles. The most beautiful of all was a big tower built for Odin. He could see everything everywhere. Nobody was allowed in it, but him. But he allowed his wife, Frigg, to sit there so she knew the secret, but she didn't say anything. 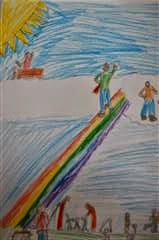 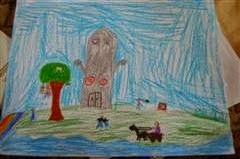 Odin
When Odin sat on his high tower, two wolves sat at his feet and two crows sat at his shoulder. Also the crows would fly to the darkest corner of the earth and then return to tell Odin what they knew. One day Odin went to Mimir, a jotun to ask to drink water from a well that would make him wise. Mimir said yes, but that Odin must share with him Odin's all seeing sight. Odin gave him his left eye. Mimir put it in the well, so when he looked in the well he could see everything. Odin became wise and he always kept a hat or hair over the place where his eye had been. 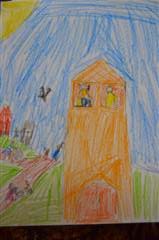 Thor
Thor is the son of Odin. He had an iron glove and a belt. When he put it on, his strength was doubled. He had a hammer that was hot, but he could hold it in his iron mitt. He did not like the jotun. He would always throw his hammer at them and hit them on the head and the hammer would come back. 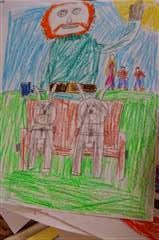 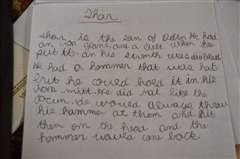 Thor's Hammer
One day Thor woke up. His hammer was gone. If he didn't have it, all of Asgard will die. His hammer protects all of Asgard. He tells Loki and Freya. She gives Loki her wings and he goes soaring across the sky, looking for the hammer. He comes to a jotun that says he has Thor's hammer and has hidden it in the ground. The jotun would not give it back until Freda would be his wife. She said, "No!" Thor dressed up like Freda and the jotun gave it to him. He killed everyone there. Then he flew off through the skies. 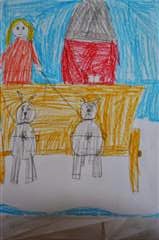 Balder's Death
Everyone was excited because Thor was always gone killing jotun. One man, Balder, began to have bad dreams. Everyone thought that meant there were bad things. His mother, Frigg, made all of the plants promise that they wouldn't hurt him. All accept one of them. Loki was jealous of him, so he dressed up as an old woman and told to Frigg, "You made everything promise not to harm your son." She said, "Yes. Everything but one plant, because it was so small that I didn't think it could harm him." So Loki went and made an arrow from the plant. Everybody was throwing things at Balder. They would have killed him, but couldn’t have. Loki went to Balder's brother and asked him why he wasn't throwing in the sport and he told him he didn't have an arrow. Loki gave him the arrow. The brother killed Balder. Loki snuck off so everyone thought his brother was to blame. One of Balder's brothers went and asked if Balder would come back but she said, "No." 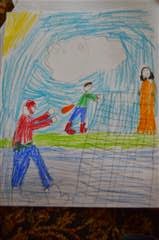