Maestro Classics: Mike Mulligan and His Steam Shovel & My Name is Handel {A Review} 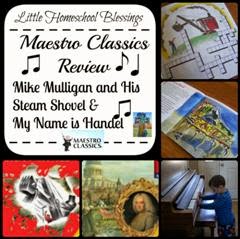 First Thoughts
When asked, "Why did you decide to record these CD's with the London Philharmonic Orchestra?" an FAQ advertising handout from Maestro Classics responds, "Kids respond to greatness..." I love that. They do respond and expect greatness and beauty in everyday moments. That quote is going on our Bits of Wisdom page.

About Mike Mulligan and his Steam Shovel story and music CD
Mike Mulligan and his Steam Shovel is a story of perseverance and respect of old things by Virginia Lee Burton. While the rest of the world is moving forward, Mike boasts that his steam shovel, Mary Anne, can dig just as well. Eventually he is put to the test. Burton wrote this story for her own son, Mike, and the ending is based on a child's response to how it should close. 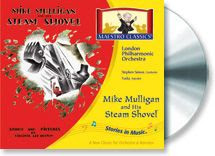 The music of the CD has two recordings of Mike Mulligan and His Steam Shovel performed by the London Philharmonic Orchestra, narrated by Yadu, conducted and composed by Stephen Simon, and Irish Bagpipes by Paul Brennan (one to listen to initially and the other to listen to after learning about the piece). There are sections about Virginia Lee Burton (author of the book) and about how a composer creates a musical score by Stephen Simon. Also included is the Mike Mulligan Song-Sing-Along. 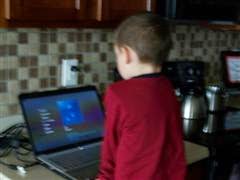 Li was so interest in Mike Mulligan and His Steam Shovel
that he pulled a chair over and watched the blue screen.
Nothing to see, just blue. 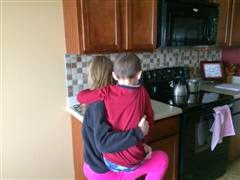 Ceesa was soon drawn to it, too. 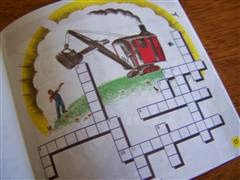 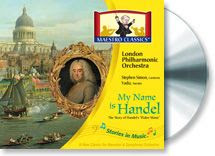 The Story of Water Music is performed by the London Philharmonic Orchestra, narrated by Yadu, conducted and composed by Stephen Simon. Some additional sections include: a biography of Handel and the story, the “My Name is Handel” Song and Sing-Along, and information about the music.

There is a 4 3/4 inch square 24-page activity book included with the CD. It has a biography of Handel, the orchestra of Handel's time, important churches in London, sheet music and lyrics to the sing-along song, information about the Harpsichord and the Organ, a timeline of the barge trip, and travel in Handel's time. 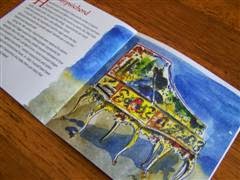 How we Used it
We listened to the CD's over and over again. Every time the kids listened, they found more things to interest them. There were new sounds and nuances to notice. 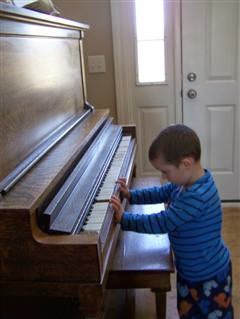 Li decided to play along with the CD.

The kids looked through the books, read them, and did the activities together. 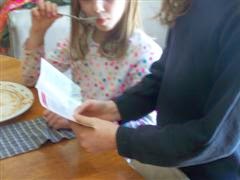 My Thoughts
On the Mike Mulligan and his Steam Shovel CD there is a section called, "Discover how a composer creates a musical score." This is one of my favorite parts. Stephen Simon discusses how he combined folk songs, sounds that mimic noises (car horns, laughing people), and tunes that remind you of things (She'll be Coming Around the Mountain) to create this piece. Then kids are invited to listen to the piece again and try to hear those things.

What the Kids has to say
Jo-Jo says, "I liked Mike Mulligan. It was fun to listen to. The water music by Handel was nice sounding."

Ceesa says, "I learned that after it said what Mike Mulligan and the others said, the music that played was making the sounds of the machines."

They both enjoyed the Handel Sing-along-song. They replayed it several times until they got it just right and had it memorized.

Recommendation
We recommend checking out the website along with the CD's. The Homeschool Music Curriculum Guides for Maestro Classics' CDs page has lots of great resources to go along with the CD and includes: history, science, geography, language arts, art, music, and math.

Future
These would be great gift ideas for the kids. Family members are always asking what to get them and these are going on the list.