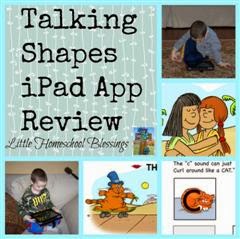 It starts with an interactive story about how two sisters invented the alphabet "long, long ago." They needed to find a way to remember the great stories that they told. So they came up with pictures that represent the sounds. These pictures can then be formed into letters. There is a set of seven stories that introduce all 40 phonemes and the letters that stand for those sounds. Each story adds six new phonemes to the list.

What's Included
We reviewed the first 3 books. Each of the stories are read to the child and include a vowel song. Each book has:

How we Used it & Required Time Involved
Li worked on each of the books and games on his own with me hovering about to assist when he needed me. He loves the i-pad and is very independent and adept at using it. He also already knows most of the letters and the sounds that they make, so he didn't need assistance from me. He would spend about 15 minutes working on the various activities of his choosing off and on throughout the weeks.

Maneuverability
There are a few easily maneuverable navigation buttons. On the home page there is a next, back, and home button. On each page, there was a ? with hints for interaction on the page. 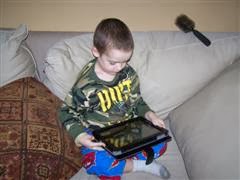 Wishlist
We would love to see the letters and boxes in the games make their sounds when Li touched them. Sometimes he would not know what would come next. If he could touch the box and the proper sound be made, he would have an easier time making it match. This would lead to a more solid phonics and phonemic awareness development.

Some quirky things happened, which may be unique to our i-pad, but would improve the program overall if not.
~For the games that go along with the second book, the reward picture at the end didn't have a book. An arrow would show up and point at nothing.
~If Li made a mistake, it would kick him out and back to the main i-pad screen. This was really frustrating for him. When he went back to the program, it started him all over again at the home page of the program.
~We could not get the voice recognition to work for the stories. You must turn it on under the i-pad's settings in the Talking Fingers box, but it still wouldn't recognize anyone's voice. This made it so we were unable to do any other part of the animation.

A couple of things that stood out to me as a Literacy Coordinator were:
1) The letters were not in an even line when placed in the boxes. When children are faced with reading text, print runs in a straight line. The letters being in different spots in the boxes can lead to confusion in how the letters look embedded into words.
2) One of the words that the child has to spell is man. When the "a" makes its sound, after being drug to the box, it is a different a sound than is in the word man.
3) All capital letters are taught. Using both the upper and lower case letters would be advantageous for early learners. This would help them with both letter/sound correspondence and with upper/lower case matching.
4) The child does not have to trace the letters in proper formation. Just rubbing your finger over any part reveals the letter-like a scratch off ticket. Proper letter tracing would reap benefits for handwriting as well as letter recognition. 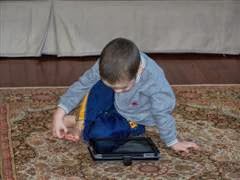 What Li Liked
Li loves the interactions. He would push the hen to make the man fall down over and over again, laughing all of the while.

He also enjoyed the vowel song that plays at the end of the stories. I would hear him singing it at various times throughout the day.

Warning
There is a bit of crude humor. There are belching mountains and a camel that belches as well.