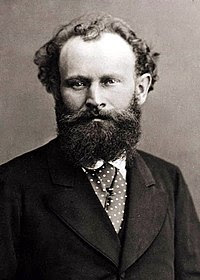 Manet was one of the first painters of the 19th century that painted real life and he was instrumental in the movement to impressionism. His work was at times controversial. He developed the style of peinture claire, the technique of lighting faces or figures from the front.

He was a part of the group of artists in France that were so vital to the impressionist period (Edgar Degas, Claude Monet, Pierre-Auguste Renoir, Alfred Sisley, Paul Cézanne, Camille Pissarro and Berthe Morisot). 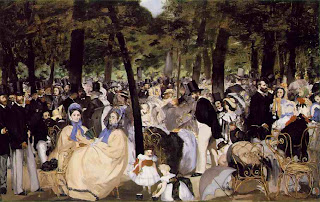 Painted at the Tuileries gardens.
Manet includes pictures of his friends, artists, authors, and musicians.
He has included his self-portrait among those present. 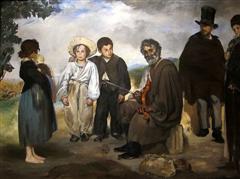 From the neighborhood of Petite Pologne, "a picturesque slum," close to Manet's studio, this work is of real indviduals. The seated musician is Jean Lagrène, an organ grinder and leader of a local gypsy band. The man in the top hat is Colardet, a rag-picker and ironmonger. At the right is a man named Guéroult.

The Races at Longchamp
1864

Manet and Degas were the only 2 artists that painted horse races at that time. Facing the horses and blurry views make it look as if the racers are coming right at us. 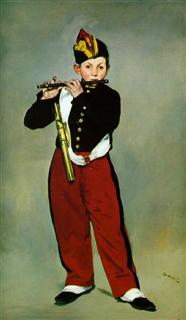 Manet painted The Fifer after a trip in Spain  in the Spanish style of the time.
The subject is a teenage musician of the band of the Imperial Guard. 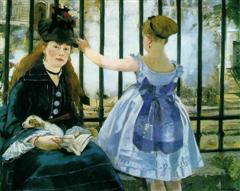 A popular model for Manet, Meurent is sitting in front of an iron fence near the Gare Saint-Lazare in Paris. Next to her is a little girl, modelled by the daughter of Manet's neighbour Alphonse Hirsch. Notice the sleeping puppy, a fan, the white cloud of steam, a book, and a bunch of grapes.

This was Manet's last major work from Folies-Bergère, a nightclub in Paris. In the mirror, one can see the barmaid, Suzon, having a conversation with a gentleman. The position of her and the man in the mirror has caused lots of controversy. In a sketch of the the scene, she was off to the right.