We received Seed Sowers: Gospel-Planting Adventures paperback book ($12.50) to review and as I suspected Ceesa loved it.

We'd recommend Seed Sowers as a read aloud starting for ages 5 and up, but it makes a great independent read as well (6th grade reading level).

About the Book
Gwen Toliver wrote seeds sowers after conducting interviews with actual missionaries (21 chapters including individuals, couples, and families) involved in Bible translation. She began this collection of stories because there are over 7, 000 spoken languages around the world, but only 500 have the complete Bible in their “heart language.”

Seedsowersthebook.com has pictures that go along with the book of some of the missionaries that share their adventures and a recording of George Cowan "the whistling man" whistling/speaking in Mazatec.

Reading the Book
We started this book as a read aloud. I would share a story or two sitting together with the kids, but I could not read fast enough for Ceesa. She kept asking to read it to us.

Ceesa is an excellent reader, but no one likes for her to read to them aloud. She has a habit of reading very fluently when she starts out, then she begins to mumble and skip words, and finally she just stops reading out loud. She starts reading entirely in her head. It is rather funny, but frustrating to someone that is waiting to listen to the story. She says that she is excited and wants to read faster.

So after about 2 attempts at letting her read it to us, I had to abandon the entire notion of using it as a read aloud. Instead, I would read ahead several chapters. Then hand it to her and let he read up to where I had read. In this way, after our first 2 days of using it as a read aloud, we finished the book in one day. She reads fast. It took me twice as long to read the sections then it did her. 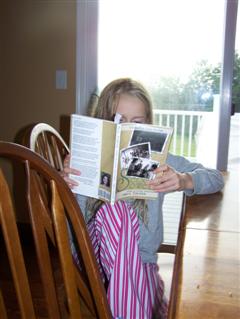 I always read what she reads first. For mostly one reason, she is very compassionate. What that means for her is that she feels what others feel very deeply and takes the hurts of others and makes them her own. This is a rich blessing, a gift, but also sometimes more than a young girl can bear. So I read first, we don’t skip difficult parts necessarily, but we proceed with caution. Sometimes I explain what happens and ask her if my summary will do or if she would like to read it. Now this is coming from a girl that would tremble at a Disney film-we don’t watch them at all. Do not own a single one. She will run from the room when anything slightly menacing happens. Boy, I love that girl.

So all this to say that there was one chapter that I summarized for her. Chapter 14: Five Empty Vessels tells the story of five men that reached out to a people group, Aucas, and were killed. It is told from the perspective of Don Johnson, a friend that was sent out in a search party for them. I knew this would be a difficult chapter I and wanted to prepare her heart for the heartache of Don in finding the remains of his friends. After I told her about it, she said, “Do I have to read it?” And so, she skipped that chapter.

Mapping the Stories
We also used it as a mapping activity. After reading a chapter we would place the people group on a map. 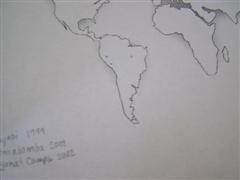 What we thought
I can easily say it was a great book. Ceesa is very interested, to say the least, in becoming a missionary and I think often unhappy with our  decision to not be missionaries. (Although I do attest and have argued that my husband’s job is a mission, even the job that is not a position at church. Bless him, he has a job and a half caring for us.). She would like nothing more than to be a missionary kid and have adventures telling people about the love she has in her God. The chapters with children didn’t help her irritation at not being in missions now. J

This book is full of trials of every kind, sometimes heartbreaking, sometimes joyous. And so many times the hand of God is made known by the wondrous ways he shows his power, mercy, and love. There were times I found myself laughing and then crying.

I'm so glad to hear of Ceesa's love for the stories and how God is planting seeds in HER heart even at this age to have an interest in missions! You can tell her that many of the missionaries that she read about in Seed Sowers decided they were going to be missionaries while they were children too. It will be exciting to see how God uses her! :)

Thanks Gwen! She loved to "hear" from you! And thank you for your hard work in writing Seed Sowers! What a blessing you've given us.