For this last term of the year,
we will be studying French, post-impressionist artists.

Gauguin is best known for his use of flat areas of color, bold outlines, and synthetist style (form and color equally balanced) of painting. He spent much of his life moving from place to place. He had a rocky friendship with Van Gogh, and like Van Gogh, was not appreciated until after his death. Gauguin was actually staying with Van Gogh when the later removed his ear. Interestingly, this occured at another location after Van Gogh had an altercaction with Gauguin.  He also did wood engraving and woodcuts. 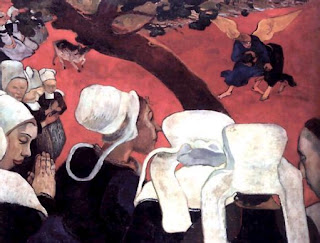 This painting is taken from the Biblical story of Jacob wrestling with the angel.
Notice the tree seperating the women having the vision from the scene? 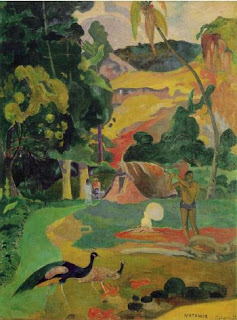 This painting is often referred to as Landscape with peacocks.
It is painted from his travels to Tahiti.

Although Cezanne's father did not want him to become an artist, he reconciled with him and left him independently wealthy. Various periods defined his work: the dark period, Impressionist period, mature period (my favorite), and his final period. 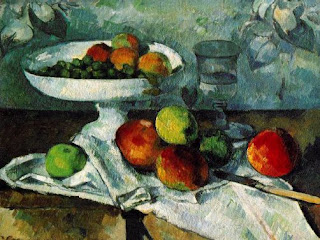 This is the first of his great still life pieces.
He was concerned with shape, color, light, and shadow. 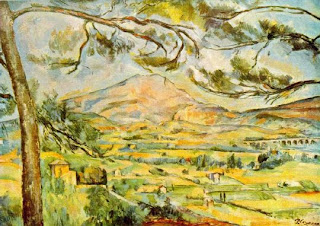 This scene comes from a limestone mountain range in South France. This particular mountain range was a favorite of Cezanne's. In most of his pieces of the mountain, you will see the railway bridge.

Seurat was interested in color theory and took a scientific approach to art. He developed the technique of pointillism, creating an image from dots that from far away blend to form an image. When his work was not accepted by the Salon, he helped organize the Société des Artistes Indépendants.

A Sunday Afternoon on the Island of Grand Jatte, 1884 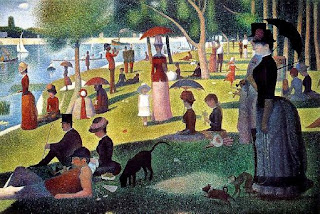 This painting (10 feet wide) took him two years to complete
and was the inspiration for Stephen Sondheim's musical,
Sunday in the Park With George.
It shows members of each of the social classes.

I love these artists! Very nice overview of them.

I studied Van Gogh in college, so his friendship with Gauguin is very interesting to me. It is neat to make connections from one artist to the other!