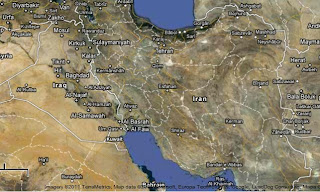 Iran and its resources vary dramatically as the range of landforms in the country promote distinctly different vegetation, animal populations, and resources.

Zagros Mountains
Iran is on an elevated plateau, the Zagros Mountains follow the western half, and there are fertile lands along the coast of the Caspian Sea.  In one part of the country, there are hills of white salt that had to be removed with iron picks. In another, there were hills of clay.

Caspian Sea
Persia is partly a great salt desert with water that tastes bitter and can't be drank safely.  Marco reported that flat regions are arid deserts with "extensive deserts and tracts of sand" with water that makes one "so nauseous that none can use it as drink."

Salt Desert
There are a couple of interesting phenomenon that Marco mentions. One occurs when dry fog is combined with the dust storm to produce darkness, which obscures the light of day making people seem invisible. The other is a "land-wind so intensely hot as to impede respiration, and to occasion death by suffocating the person exposed to it. As soon as the approach of this wind is perceived by the inhabitants, they immerge themselves to the chin in water, and continue in that situation until it ceases to blow."

Due to these conditions, the danger of robbers, and the differences in terrain, a trusty conductor was necessary for guidance through Persia.

turquoise
Marco writes of the tree of sun (arbre sec). "It is loft, with a large stem, having its leaves green on the upper surface, but white or blush on the under. It produces husks or capsules like those in which the chestnut is enclosed, but these contain no fruit. The wood is solid and strong, and of a yellow color resembling the box."

Marco felt the water vessels were inferior and he and his traveling companions would not take one on their trip, although some vessels are still built similar today. These vessels were built with wooden pins sewed together with fibrous stuff (like horse hair), smeared with an oil made from the fat of fish, and caulked with oakum.

Persia was known for its beautiful mosaics and cloth. Clothing, blankets, woven carpet were woven by women in silk and gold and a variety of colors and patterns representing birds and beasts with other ornamental devices designed for curtains, coverlets, and cushions for the sleeping places of the rich "object of admiration." Yazdi was a patterned silk, Muslin had silk and gold fabric, and brocade was fabric woven from a raised design. (Here is an interesting carpet link.)

Marco also had much to say about the people he encountered and stories of famous people. He recorded that "the women, who, in my opinion, are the most beautiful in the world." He mentioned men that wore cord on their heads. He discussed as length the Old man of the Mountain (Hassan and his first sect of assassins) and the city of Saba, the origins of the three Magi took to Bethlehem to adore Christ.

Activity: Create a mosaic or try this one. Here are our mosaic pieces. 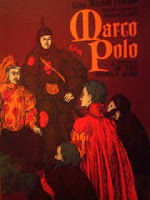 Photos courtesy of wikipedia.org. See our References for more information.
I am working on a year long series on the Polo family travels and thought I'd share it with you. Enjoy and please post any additional information you have for us or corrections.

Previously:  Georgia  and Panning for Gold     Next Up: Afganistan
Wishing you homeschool blessings,
Bethany
Posted by Bethany at 5:22 PM