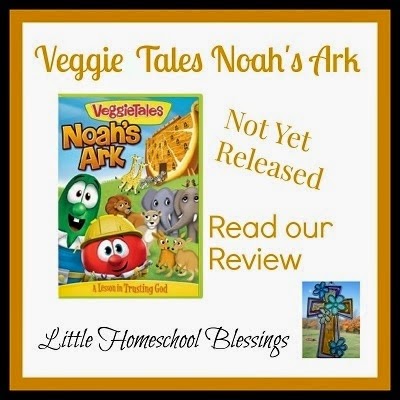 I received a free Screener copy of Veggie Tales: Noah's Ark from Family Christian in exchange for my honest review. I was not required to write a positive review nor was I compensated in any other way for writing the review. All opinions I have expressed are my own or those of my family. I am disclosing this information in accordance with the FTC Regulations.

Okay Friends! Here's something new. A QUIZ! Hurray! No? Well come on anyway, this will be fun. :)

How much do you know about the Bible story of Noah's Ark? (Answers will be provided at the end of the post with scripture references.)

1) How many animals of each kind did Noah take on the Ark? Easy! Two right? Guess again.
2) How long was Noah and his family on the Ark? Forty Days and Forty Nights? Nope.
3) What did Noah do when his family and the animals left the Ark? Well...
4) Who did Noah bless and curse after leaving the Ark? Hmm...
5) And lastly, what does an orange slice ark, a giant squid, and a bunch of vegetables have to do with Noah's Ark anyway?

Not too bad huh? Are you wondering what brought on all the questions? Well...

We got chosen to watch the screener for the not-yet-released Veggie Tales movie Noah's Ark! 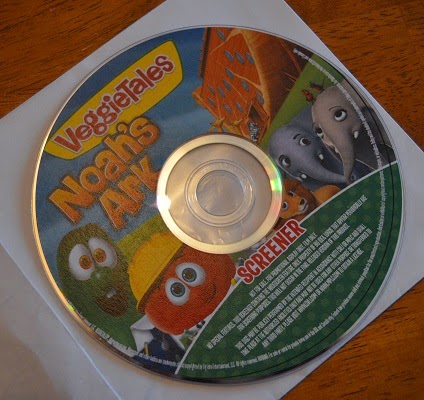 Maybe you've heard that the Veggies are getting a new look. Well Noah's Ark is the debut of that new look!

Noah's Ark tells the story of...well you guessed it...Noah's Ark. :) Veggie style. Noah and his family head off on an adventure of God's design and they must stick to His plan. Shem is especially disappointed to have to change his plans for building his house and moving onto the ark. The animals come, the rains come, and it is a real test to wait until God's promises come to pass. And of course there is a silly song with Larry singing about "my golden egg." The running time is approximately 50 minutes.

What we Thought
Ceesa likes the part at the end where Roger (the elephant in the room) leaves a mess for Larry to clean up. About the new look, she says, "It was a little weird at first to see the change, but you get used to it."

One day when the kids were sitting at the table, Ceesa says, "I would be braiding all of the animals hair too!" One of the daughter-n-laws was running out of animals that would let her braid their hair. Ha! I believe it. Ceesa has been braiding and re-braiding her hair everyday for the last month! 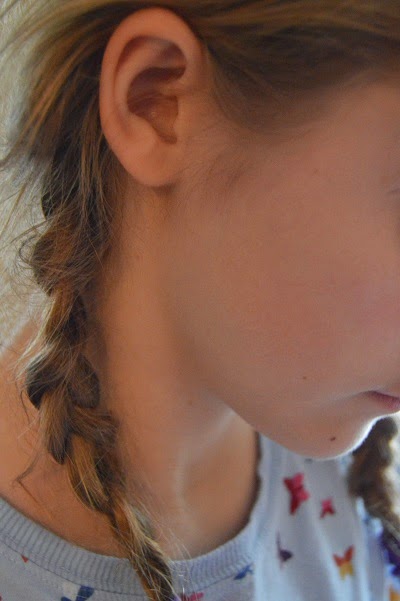 Li says about the new look of the veggies, "They are scary and creepy. I love it." He will break out in a, "Ahh! Don't scare us like that!" and "Get the shovels!" and "I'm happy with my pig and my popcorn." from time to time.

Jo-Jo likes when Shem is singing about his awesome wife and he spins in a circle. She reports that, "Hasta La Vista, Leakys." is one of her favorite lines.

Poppa says that the hardest thing to get used to has something to do with the eyes. Some of the veggies have eyes now and they have color.

We both thought it was funny at the beginning of the movie when  Bob and Larry are talking on the counter...
"You know what Bob? I think that we should just address the elephant in the room."
"You think so?"
"Yep."
"Hi Roger!" (Oh, did I mention there was an elephant on the counter?)

And so, I'm not sure exactly what I said, but Jo-Jo looks at me one day this week and says, "Mommy you quote Veggie Tales more than anything else." That is probably because our collection of Veggie Tales is our largest movie collection period.

Now at first I was none too sure about the change, but after watching it the second time, I think I like the new veggies just fine.

One of my favorite parts is when Noah says, "Put those on the top deck my dear. Be gentle!" The reply from one of his daughter-n-laws is..."Of course I will.  I'm a lady." (And then she proceeds to crash into the scaffolding with the load she is moving). Another is when Shem is attempting to leave the ark. Everyone is telling him to get on the ark. He obstinately says, "I will get on that ark, when I'm good and ready and fully convinced..." His wife says, "Shem, get on the boat." He replies, "Okay."

Veggie Tales Educational?
Definitely. We not only get the change to read the Biblical account of Noah's Ark (hence the quiz), but we have now been studying giant squid.

Who wants this?
Umm...Veggie Fans, of course!

You can pre-buy your very own copy of Veggie Tales Noah's Ark here. It will be available March 7!! And when you pre-buy it, Family Christian is offering VeggieTales: Rack, Shack & Benny DVD for free.

Family Christian has also generously offered to giveaway a $10 Appreciation Certificate to our readers (in the US) that you can use to put toward your DVD purchase or something else of your heart's desire!


You may redeem your Appreciation Certificates at any Family Christian store or for online orders enter as a coupon (or call customer service). Use only one per transaction, no cash value.


The winner will be randomly picked by Rafflecopter and will be notified by Bethany from Little Homeschool Blessings via email and posted here. Entrants must be 18 years or older and reside within the United States. This giveaway is in no way associated with Facebook,Twitter, Pinterest or any other entity unless otherwise specified. The prize will be issued by Family Christian. By entering this giveaway you are also acknowledging that you have read and agree to all of the Rafflecopter terms & conditions.


And now...the Quiz Answers
1) Seven of every kind of clean animal, a male and its mate; and two of every kind of unclean animal, a male and its mate; and seven of every kind of bird, male and female.~Genesis 7: 2
2) 7 days (Noah was on the ark before rains began) + 40 days and 40 nights (flood came on) + 150 days (waters flooded the earth + seventeenth day of the seventh month to the first day of the tenth month +40 days (Noah opened the window) + 7 days (sent out dove) + 7 days (sent dove again) + first day of the first month to the twenty-seventh day of the second month (earth was completely dry) = Noah was 600 hundred 2 months and 10 days upon entering the ark and 601 hundred years 2 months and 27 days when the earth was completely dry. = approximately 1 year and 17 days by my calculations~Genesis 7: 1- 8:18.
3) Noah built an altar and sacrificed some of all of the clean animals and birds. ~Genesis 8: 20
4) Noah blessed Shem and Japheth; and cursed his grandson, Canaan, Ham's (Noah's youngest son) child. ~Genesis 9: 18-27
5) Veggie Tales: Noah's Ark :) 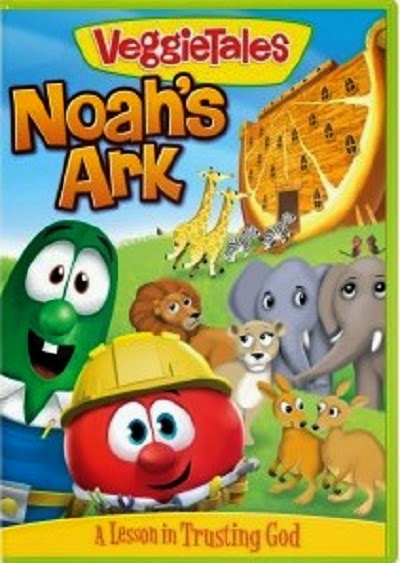 Update: The kids have been very busy working on inspiration from the movie... 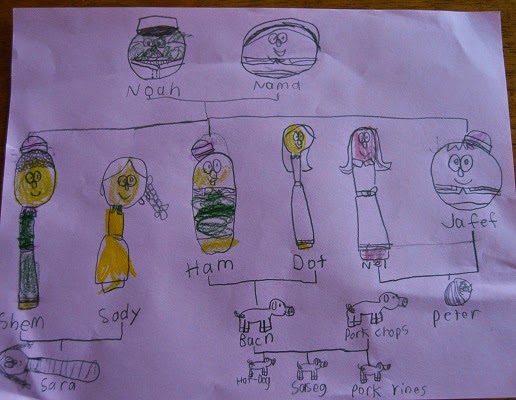 Ceesa made a Family Tree with her own additions. 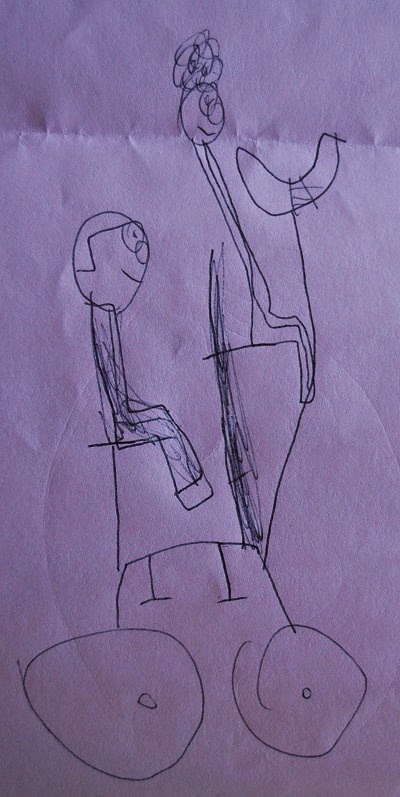 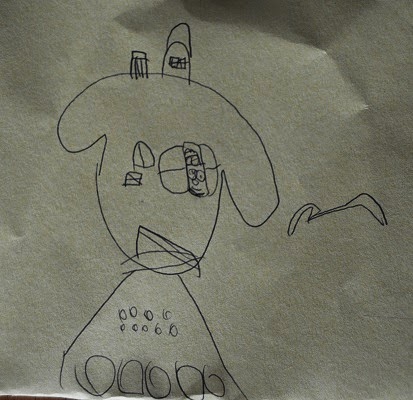 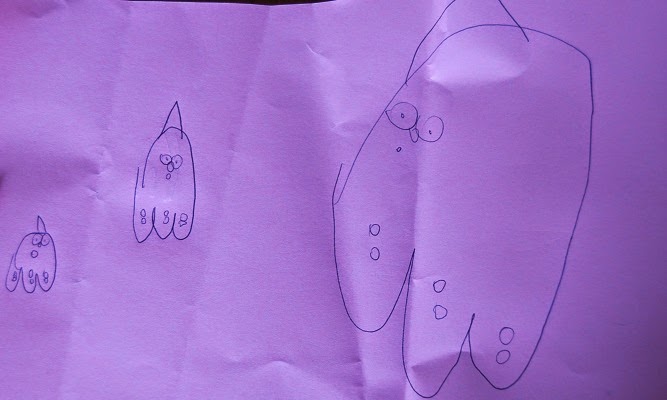 Li drew a giant squid as he grew from baby to adult. 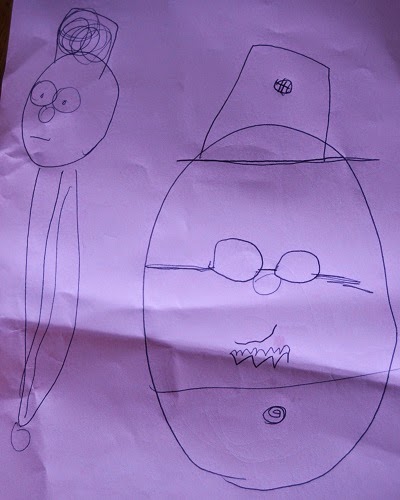 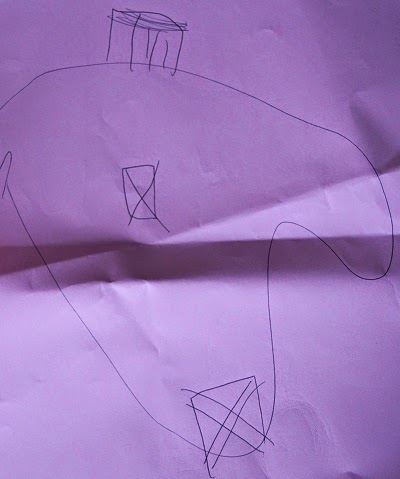 Ceesa's chart of what everyone's job was on the ark. :)
﻿

My girls enjoyed Veggie Tales when they were little. Madame Blueberry is my favorite one.

Yes. I think that still remains my favorite too!